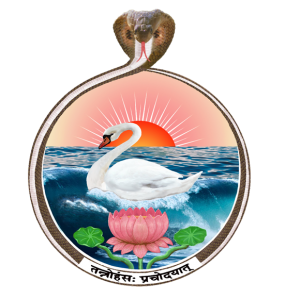 The emblem depicts the four paths to God:

The Ramakrishna Order, with headquarters in Kolkata, is one of the largest and most respected religious orders in India today. The Order was inspired by the great Bengali saint, Sri Ramakrishna. Shortly before his death in 1886, Ramakrishna encouraged his young disciples to formally renounce the world by giving them the ochre cloth of renunciation. He entrusted the care of these young men to his foremost disciple, Swami Vivekananda, who later, in 1897, founded the Ramakrishna Order.

There are over 166 official centers of the Ramakrishna Order, and many more unofficial, or unaffiliated ones. These centers not only cover the length and breadth of the Indian subcontinent, but can also be found in Europe, Russia, Japan, South America, Africa, Canada and the United States.

On the Indian subcontinent, the Ramakrishna Mission has been in the forefront of philanthropic activities. Its first social service efforts – inspired by Swami Vivekananda – began in 1897. Since that time, the Mission’s activities have continued to expand up to the present day.

In educational activities, the Ramakrishna Mission has consistently been ahead of its time. It has developed some of the most outstanding educational institutions in India, having its own colleges, vocational training centers, high schools and primary schools, teachers’ training institutes, as well as schools for the visually handicapped. It also has adult education centers through out the county.

Whenever disaster has struck, the Ramakrishna Mission has been there to offer relief from famine, epidemic, fire, flood, earthquake, cyclone, and communal disturbances.